I usually make a quick quesadilla with cheese and salsa but it’s never really filling and I always feel like I’ve eaten way too much cheese.  This quesadilla with zucchini, corn and olives hits the spot.  The zucchini is filling, the corn sweet and the olives are salty – a great balance of textures and tastes.  A little pepper jack cheese, scallions and garlic give it just the right amount of bite.  I was originally going to add black beans instead of olives but when I checked the cupboard there were no black beans in sight.  I was sure I had some but alas the cupboard was bare.  So a substitution was made using olives – which turned out to be a happy, tasty accident.

I had avocados and cherry tomatoes on hand so made a quick and simple salsa to go with it. Just add half an avocado (diced) to a cup of  cherry tomatoes (halved) – add a little bit of scallion or red onion (I used scallion), mix in some minced cilantro or parsley (I used parsley) and toss with the juice of a half lime and a tablespoon of olive oil.  Then add a little black pepper and you’re done.   I don’t like my salsa too spicy but if you do add some red pepper or jalapeño.  If you don’t feel like making it then use a jarred salsa instead – go for easy I say. 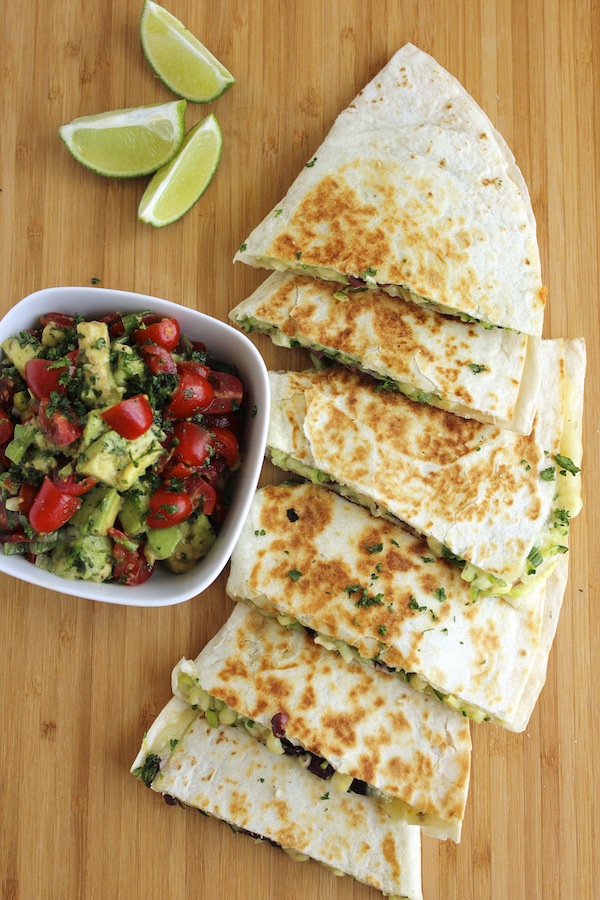 I wiped one side of the tortilla (the side that is going facedown in the pan) with just a little bit of olive oil.  This gives you a crispier tortilla shell.

Don’t have the heat too high on the stove.  You’ll end up burning your quesadilla before it’s had the chance to melt the cheese inside.  The burner should be on medium high.

Quesadilla with Zucchini, Corn and Olives